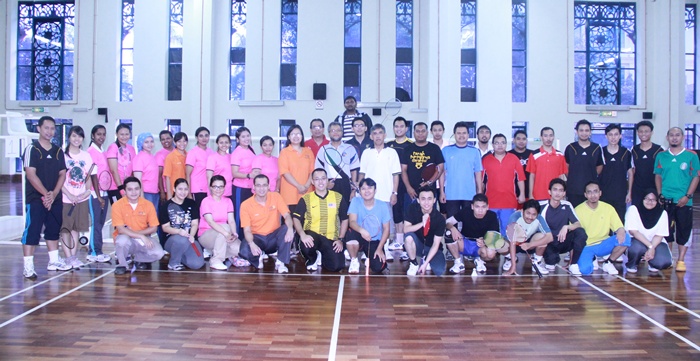 On 12th March 2011, Wisma Putra hosted an epic battle on her courts when the IDFR Badminton Open took place on this fine day. 24 pairs of men and women battled it out to be crowned this year’s champions. The event was made memorable with the Director General himself, Y.Bhg. Dato’ Ku Jaafar Ku Shaari, not just with his opening ceremony cross court rally, but also his trailblazing participation throughout the whole event.

This in turn rallied the other participants to provide a fine show of sportsmanship by all. In today’s three categories, there could only be room for three sets of victors. The winners and runners-up for this year’s IDFR Badminton Open are the following :

At the end of the day, the prize money and trophies offered were mere incentives. The real prize of the day were the new friendships made and the old ones being rekindled. It was also a pleasure to see the brimming faces of the victors and the vocal promises by the vanquished promising a better fight next year.

It would have been a fair call to say that the IDFR Badminton Open would have not even materialized and become such a success if not for the efforts of the DiD organising committee which had worked day-in-day-out to bring IDFR one of its most pulse raising sports tournaments for the year 2011.