Seminar: Perspectives on Islam and the West – The Need for Cultivating Moderate Outlooks 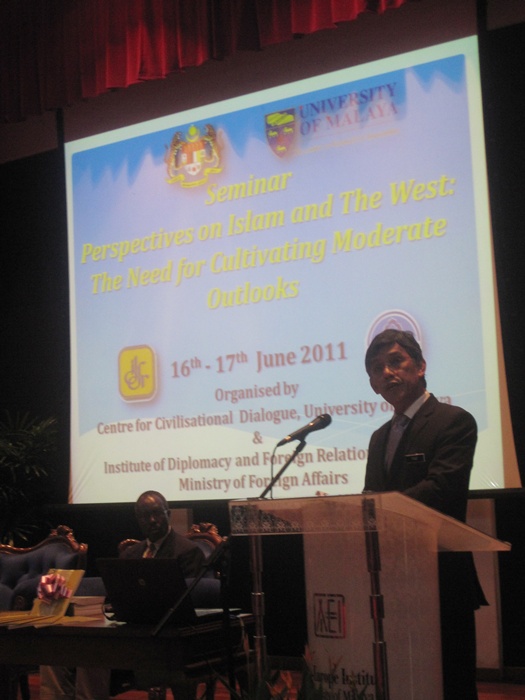 The Prime Minister of Malaysia, Dato’ Sri Mohd Najib Tun Abdul Razak recently called for a global effort to launch a Global Movement of the Moderates (GMM). In order to create an input to the Global Movement of the Moderates concept, the University of Malaya Centre for Civilisational Dialogue (UMCCD) and the Institute of Diplomacy and Foreign Relations (IDFR) organised a two-day seminar on Wassatiyyah or moderation, entitled Perspectives On Islam and the West–The Need for Cultivating Moderate Outlooks, on 16 and 17 June 2011, at the Auditorium of the Asia-Europe Institute, University of Malaya. The seminar was divided into four sessions with different themes; Islam and the West: Perceived Relationships, Working Definitions, Indigenous Perspectives and Case Studies. Ambassador Abdullah Faiz Zain, the Deputy Director General of IDFR presented the keynote address and launched a Monograph Series Centre For Civilisational Dialogue, Towards Developing an Indigenous Philosophy Module: A Roundtable Dialogue by Professor Dr. Samuel O. Imbo.

On the first day, Professor Dr. Chad Haines from Arizona State University, one of the presenters for the first session, spoke about the importance of dialogue in receiving any viewpoint and that we should question ‘moderation’, ‘moderates’, ‘multicultural’ or any other concept, instead of merely receiving the information passively. The second presenter, Professor Dato’ Dr. Mohamad Abu Bakar from University of Malaya, spoke about moderation or the Wassatiyyah concept according to Al-Quran, where injunctions of the Prophet Muhammad (PBUH) stressed the importance of living life moderately, be it in eating, spending or even fasting. The second session of the seminar was presented by Professor Dr. Samuel O. Imbo from Hamline University in Saint Paul, who spoke about moderation in the similar viewpoints of ancient Greek philosophers like Heroclitus, Plato and Aristotle, and also modern philosophers like John Locke.

On the second day, the seminar moved on to area-specific issues. Professor Dr. Habib Chirzin from HAMKA University spoke about moderation in daily indigenous practices of the Javanese people in Yogyakarta, be it in their town architecture, gender equality, art and cultural activities, traditional food sovereignty, hospitality, travel and others. Professor Dr. Shaharir Mohamad Zain from University of Malaya then spoke on how moderation or wustisation policies and practice have existed and practiced explicitly in Islamic tradition or civilisation, wasatdiyyaht and in the pre-Islamic Malayonesian Civilisation during the period of 2nd century AD to 14th century AD, where the communication language of the people are mainly Malay along with other languages like Champa, Javanese and others in the same category as the Malay language, known as the Austronesian. All these practices and policies show that moderation is not a new concept but more importantly, it is very much practiced in the Islamic tradition a very long time ago. The seminar proceeded to a case study presentation by Professor Dr. Yasmin Saikia from Arizona State University who explained that moderation should not only exist between Islam and the West but also internally, between Muslims. She shared two key concepts learnt from the survivors of the 1971 India-Pakistan war: the awareness of zulm or injustice and the transformation of ordinary men in zalim or oppressor and its post-war discourse on insāniyat or humanity in the war in South Asia.

The seminar ended with a reflection session by the visiting professors, Professor Dr. Chad Haines and Professor Dr. Yasmin Saikia. Professor Haines summarised the four challenges towards moderation. The first challenge is that we have to engage with tradition that is constantly remade. The second challenge is that there are different ways of engaging religion as a field of study versus religion as a faith. Third is the challenge of singularity where the idea of moderation becomes a singular idea which is constantly questioned. The fourth and final challenge is power, where we have to develop ways to engage with the power of government and social elites. He then urged the participants not to turn moderation into an empty political rhetoric. At a personal level, Professor Haines emphasised that moderation is “not so much our position of who we are, Malays, Christianity, etc., but as human beings”. Professor Saikia thought that the seminar was a wonderful opportunity to think of the important issue of moderation and develop a historical and anthropological story that can be projected to the world, coming out of the non-West.