DiD 2015: Session with YBhg. Dato' Saifuddin Abdullah, CEO of Global Movement of Moderates (GMM) on Xenophobia, Inter-cultural and Inter-religious Issues

DiD 2015 participants attended a session on Xenophobia, Inter-cultural and Inter-religious Issues held at the Treaty Room, Institute of Diplomacy and Foreign Relations (IDFR) on 9 July 2015. The session was delivered by YBhg. Dato' Saifuddin Abdullah, Chief Executive Officer, Global Movement of Moderates.

During the session, Dato’ Saifuddin spoke on Malaysia’s experience dealing with xenophobia and the public’s sentiment towards immigrants. He reiterated that handling perception was the key to overcome xenophobia, inter-cultural and inter-religious conflicts.

Dato’ Saifuddin also shared his experience attending the United Nations Universal Periodic Review (UPR) in 2013 and suggested for the Ministry of Foreign Affairs Malaysia to continue engaging other Ministries and Agencies in order to improve Malaysia’s position and policies on issues related to xenophobia.

DiD participants took the opportunity to ask questions related to xenophobia, inter-cultural, inter-religious and National Unity Consultative Council (NUCC) issues. At the end of the session, Dato’ Saifuddin expressed his well wishes to all the DiD participants who would soon be posted abroad.

The session reached its objective to enhance and widen the participants’ perspective on these issues. This would be an added advantage for the junior diplomats attending multilateral meetings such as the United Nations (UN), Organisation of Islamic Cooperation (OIC) and the Association of Southeast Asian Nations (ASEAN). 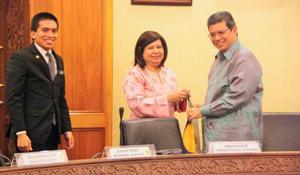