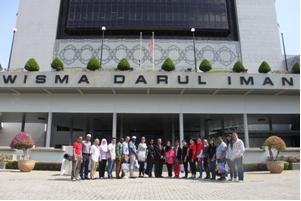 The course aimed to provide knowledge and diplomatic skills in the conduct of diplomatic and foreign relations among the participants by sharing Malaysia’s experience in managing its foreign policy and international relations. It also aimed to provide them with hands-on experience on areas related to diplomacy and international affairs. The course also served as a platform for networking and exchanging of views among the participants.

During the course, the participants went through an integrated teaching and learning methodology which included briefings, discussions, interactive lectures, simulations and exercises. Among the modules conducted were Introduction to Malaysia’s Foreign Policy, Current International Relations and Global Issues, Public and International Law, Applied Psychology in Diplomacy and Language and Diplomacy. The participants were also taken to the Ministry of Foreign Affairs, Malaysia and the Parliament for onsite briefings.

In addition, the participants were introduced to Malaysia’s state-level governance when they spent five days in the state of Terengganu. This module aimed to provide further understanding on the mechanism involves in Malaysia’s governance system whereby the Federal and State Government play and share equal role and responsibility in developing the nation.