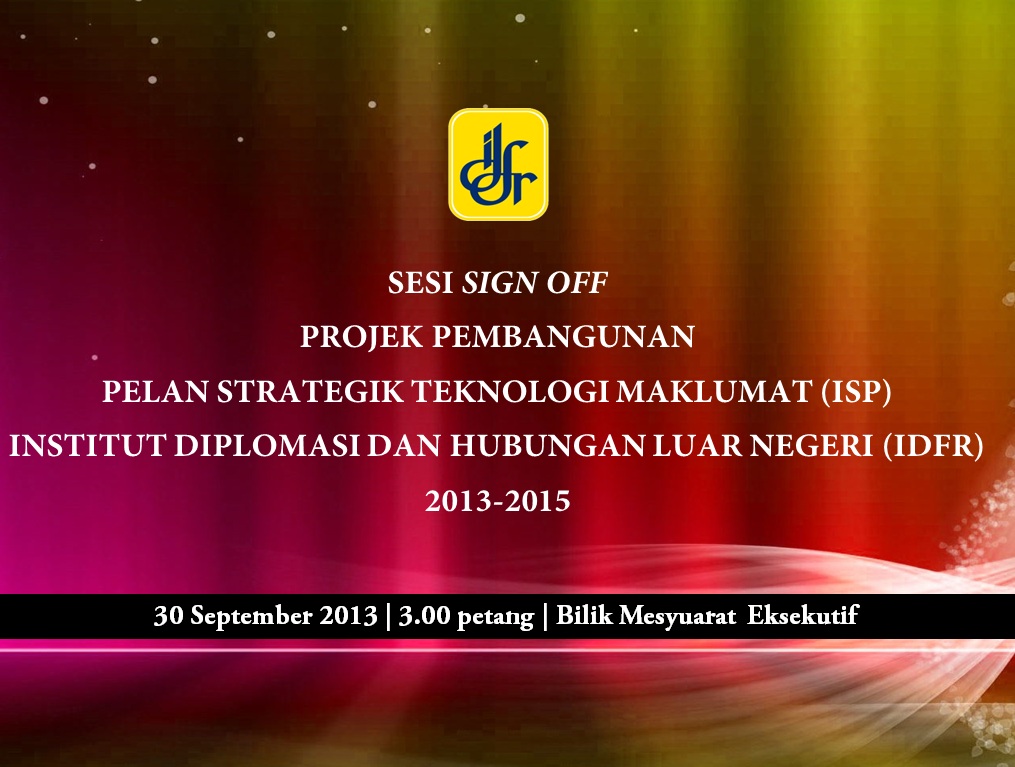 The sign off session of the Development Project Information Technology Strategic Plan (ISP), IDFR, took place on 30 September 2013 in The Executive Room, Block A, IDFR. The session was held during the Development Committee Meeting ISP (JKPISP) IDFR Number 4/2013 which was chaired by YBhg. Dato’ Zulkifli Yaacob, Director of Management Services and Corporate Division, which is also the Project Director ISP IDFR. Additionally, also presents were YBhg. Dato’ Dr. Zahari Othaman, the head of the Consultant Team ISP MAMPU and Mr. Faizal Abu Kassim, member of Consultant Team ICT public sector, MAMPU and along with ISP IDFR.

In the opening speech, YBhg. Dato’ Zulkifli Yaacob illustrated in details that ISP IDFR was developed in collaboration with MAMPU within six (6) months starting from March to September 2013 and is a document which sets out the strategic role of ICT in supporting and expanding the functions IDFR. ISP document is also the ICT IDFR Blueprint from the period of 2013-2015; the action plan will be implemented based on ICT in various programs and activities. During the development period of three (3) respectively for workshops and meetings JKPISP held that the ideas and suggestions of the participants refined and the consent of the committee. He suggested that the planned projects in 2013 can be implemented successfully as KPI targets, namely:

Before the sign off session took place, YBhg. Dato’ Dr. Zahari Othman had demonstrated a clear explanation on the scope completed by their team, which provides consulting services for handholding and coaching for the following activities:

YBhg. Dato’ Dr. Zahari Othman also advised that an action plan be developed ICT can be implemented within the period prescribed and used as a basis to apply any provision of ICT projects for the period 2013-2015.

In closing the meeting, YBhg. Dato 'Zulkifli Yaacob representing the IDFR has to express my heartfelt congratulations on commitment, time and energy devoted to realizing ISP JKPISP IDFR to all members. Our thanks also goes to the Consulting ISP, MAMPU on coaching and
consulting services throughout the project period.