Transboundary Pollution: What We Know and What Can We Do About It? by Professor Euston Quah 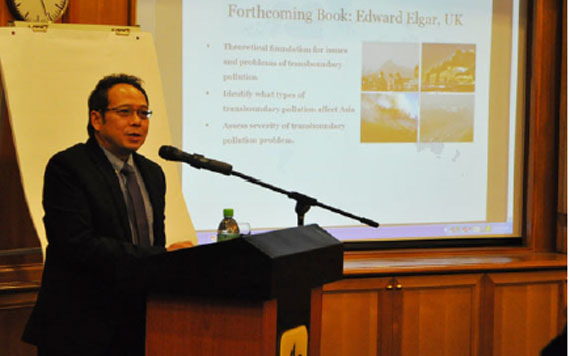 A lecture titled, Transboundary Pollution: What We Know and What Can We Do About It? by Professor Euston Quah, PhD from Nanyang Technological University (NTU) Singapore was held at the IDFR Treaty Room on 11 November 2013. The focus was to highlight cross boundary pollution and its effects on environmental economic issues, the depleting resources as a result of this type of pollution and to discuss the theoretical foundations.

Professor Quah gave several examples of transboundary pollution namely, the Pearl River Delta in Hong Kong where the actual pollution and smog originated from Guangdong, China. Other examples were the pollution of the Mekong River in Southern Vietnam, paper mills from Yunan and untreated domestic waste water from Northeast Thailand. He also highlighted that the occurrence of haze annually in Southeast Asia which is caused by a technique called slash and burn in the plantation sector was the main contributory factor. He underlined that the lack of coordination and limitations of the political, social and legal institutions as reasons for the issue of transboundary pollution to be yet successfully addressed after nearly two decades.

The haze has also impacted negatively in areas of the economy such as health, industrial production, tourism, airline and the finishing industry. Limited resources, weak regulations and institutions of control, lack of political will and the nature of ASEAN framework were also better management of crops and enhancing the authorities and stakeholder approach to cost sharing.

He concluded that it was vital to look at the level of incorporation and reconciliation among stakeholders and institutions in both victim and polluting countries.

The attendees for this lecture included policy makers, academics, students and representatives from various governmental agencies, universities, non-governmental organizations and also the media. 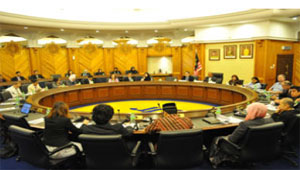 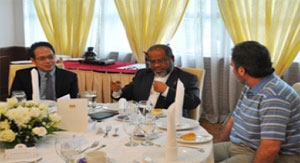