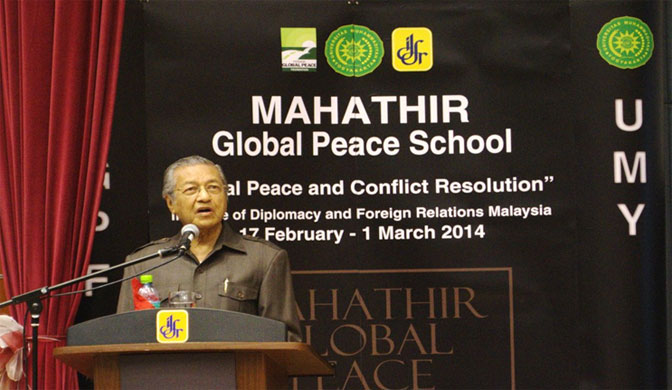 On 17 February 2014, the Institute of Diplomacy and Foreign Relations (IDFR) hosted the Official Launching of Mahathir Global Peace School with the theme “Global Peace and Conflict Resolution.” The programme was organised by Universitas Muhammadiyah Yokyakarta and the Perdana Global Peace Foundation (PGPF).

The objective of Mahathir Global Peace School is to explore strategies in order to construct a just and peaceful world and aims to investigate the political, ethical, legal and economic implications of global peace and its relationship to cosmopolitanism as an alternative to more traditional notions of nationalism.

The Fourth Prime Minister of Malaysia and President of Perdana Global Peace Foundation, Tun Dr. Mahathir Mohamad then delivered his keynote address and official launching. He mentioned that democracy stresses on human rights however, the rights of civilians are taken away when bombs land on their soil. He also believes that ordering others to kill is the worst crime. With regards to creating a just and peaceful world, Tun Dr. Mahathir stated that diplomacy is the best tool to resolve conflicts. He provided examples of regional conflicts that occurred during his time as Prime Minister and conveyed that Malaysia and its neighbours would seek help from the world court rather than to use force.

Public lectures from Former Vice President of the Republic of Indonesia, Dr. M Jusuf Kalla and Chairperson of the Central Board of Muhammadiya, Prof. Dr. M Din Syamsudin concluded the programme. 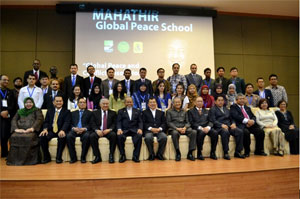 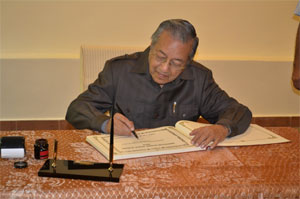