Adam Smith on the Decline of Islamic Science 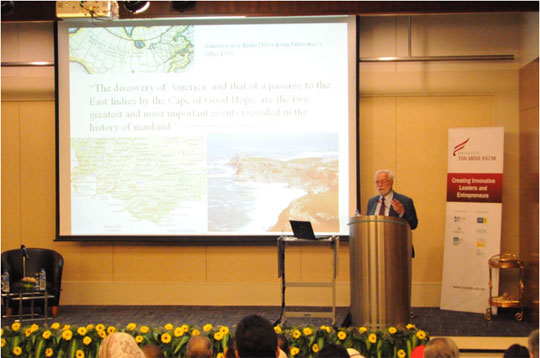 On 26 May 2014, Universiti Tun Abdul Razak (UNIRAZAK), in collaboration with Noah Foundation, organised a public lecture titled, Adam Smith on the Decline of Islamic Science. It was presented by Professor George Saliba, Mohamed Noah Fellow at Centre for Islamic Studies, Oxford University and Professor of Arabic and Islamic Science, Columbia University.

Professor George Saliba introduced his lecture with a question that was raised by Joseph Needham, a British scientist and historian, on why Modern Science developed in Europe in 16th century but not in Islam’s, China’s and India’s civilization. He argued with those who believed the rise of religious thought, exemplified by the works of Imam Ghazali, author of Tahafut al-Falasifa (incoherence of the Philosophers) and the unwillingness to undergo religious reformation were directly responsible for diverting attention from the pursuit of philosophy and science.

Through the famous 18th century economist and philosopher Adam Smith, Professor George Saliba explained that the answer lies in the global shifts that took place during that century such as the discovery of the United States of America. As a result of the “Age of Discovery”, science was enslaved to the commercial market and shifted into investments in navigation instruments; whereas in Islam, astronomers and mathematicians invented instruments to locate Mecca. He also stated that during the Italian Renaissance, many inventions such as Galileo Galilei’s Geometric and Military Compass were duplicated from Islam. It was Khafir Ghulan who designed, “The Perfect Compass” in 10th century, Baghdad.

The Oxford University Professor concluded by stressing the fact that phenomenon of decline in science and philosophy was not restricted to Islamic civilization, but was a universal phenomenon that covered all other non-European civilizations. In order for science to develop in Islam, it must comply with Shariah Law; knowledge must be shared, monopolies and interest rates erased.

{loadposition falang}
back to top