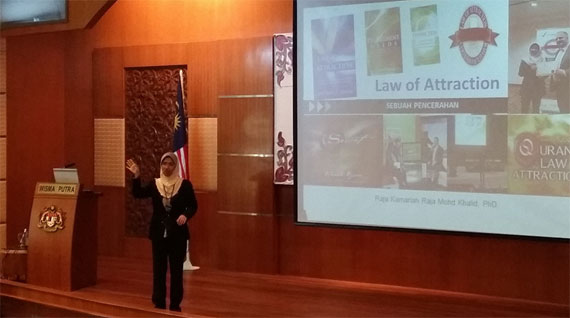 In her talk, she shared three important elements of the Law of Attraction; expand the positive vibes, visualize one’s goal and resign oneself to The Creator (tawakkal). In order for everyone to get the energy and expand positive vibes, everyone has to think positive at all times and remove all the negative vibes that might be interfering. Another way to build the positive vibes is to mix with positive thinking people. Second, visualize oneself in the future and determine one’s goal in a certain period of time. By visualizing this goal, one would be inspired and motivated to achieve that goal. However, this activity of visualizing should be done frequently, so that it would inspire one continuously. The last element is tawakkal. As a muslim, one needs to leave it all to The Creator after all efforts have been taken.