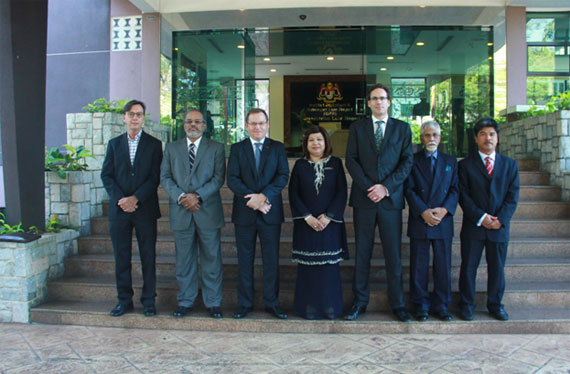 2014 marks the 40th Anniversary of Australia’s dialogue partnership with ASEAN. To commemorate this event, The Institute of Diplomacy and Foreign Relations (IDFR) in collaboration with The High Commission of Australia organized a panel discussion themed, “Strengthening Regional Integration Through Strategic Partnership”. The objective of the panel discussion was to chart the evolution of Australia’s engagement with ASEAN, The importance of ASEAN-Australia relationship and to explore future directions together. The panel discussion consisted of YBhg. Dato’ Dr. Mohd Yusof Ahmad Head of Institute of ASEAN Studies and Global Affairs (INSPAG) Faculty of Administrative Science and Policy Studies as the Moderator, H.E. Ambassador Simon Merrifield Australia’s Ambassador to the Association of South East Asian Nations (ASEAN) as the first panelist, followed by H.E. Ambassador Jojie Samuel, Deputy Director General ASEAN Socio-Cultural Community, Ministry of Foreign Affairs as the second panelist and Dr. Sufian Jusoh, Distinguished Fellow of IDFR, Senior Fellow and Director, Centre for International Law and Siyar (CILAS), Universiti Kebangsaan Malaysia as the third panelist.

The event commenced with welcoming remarks by YBhg. Ambassador Aminahtun Haji A. Karim. She reminded the audience and the panelists of the significant partnership that Malaysia had with Australia in the past and that both regions have attributes that could be utilised to curb security threats involving terrorism, human trafficking and other transnational crimes.

H.E. Ambassador Simon Merrifield delivered his presentation titled, “Australia and ASEAN: The path to a Strategic Partnership and Beyond”. He recalled the historical ties between Malaysian and Australia and how Australia played an active diplomatic role in obtaining international support for the formation of Malaysia in 1963.

The panel discussion continued with H.E. Ambassador Jojie Samuel who delivered his presentation titled, “The Strengthening of ASEAN-Australia Relations under Malaysia’s Chairmanship of ASEAN 2015”. He began by giving a background of ASEAN chairmanship and highlighting that Malaysia will officially assume the role of ASEAN chairmanship beginning 1 January 2015.

The final panelist was Dr. Sufian Jusoh who spoke on “ASEAN and Australia in the era of the AEC: The way forward”. He started by sharing his personal experience when he was assigned to undertake the study of investment flow prospects between ASEAN, Australia and New Zealand under the ASEAN-Australia-New Zealand Free Trade Area (AANZFTA) Economic Co-operation Work Programme (ECWP).