A Sharing Session on Humanitarian Crisis in Syria 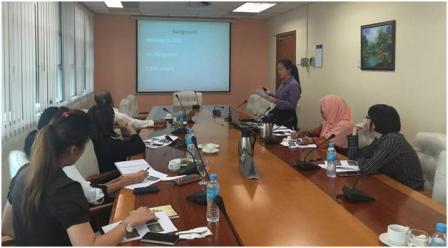 Ms. Sam Pei Ying, a UNIMAS undergraduate student, who is doing her internship at the Institute of Diplomacy and Foreign Relations (IDFR) presented her final year project to YBhg. Dato’ Hussin Nayan, Director General of IDFR; Amb. Aminahtun Haji A. Karim, Director of PSED; and officials of the Centre for Political Studies and Economic Diplomacy (PSED) on 20th August 2015.

Ms. Sam presented her research, titled “Humanitarian Crisis in Syria” with the emphasis on the reasons behind the negligence of the Permanent Members of the United Nations Security Council (UNSC), particularly China and Russia on this issue. Ms. Sam stated that her findings were based on the “Just War Theory” and the principle of “Responsibility to Protect”. The “Just War Theory” explained how wars can be morally justified, whereas the principle of “Responsibility to Protect” is on the norm that sovereignty is not an absolute right. Hence, she used this principle and theory to explain the prolonged condition in Syria. The relationship between these two notions reflected certain shortcomings in the UNSC which caused the humanitarian crisis in Syria to remain unresolved until today.

The questions from the floor were on the UNSC resolutions to the crisis and the nature of the principle of “Responsibility to Protect”.