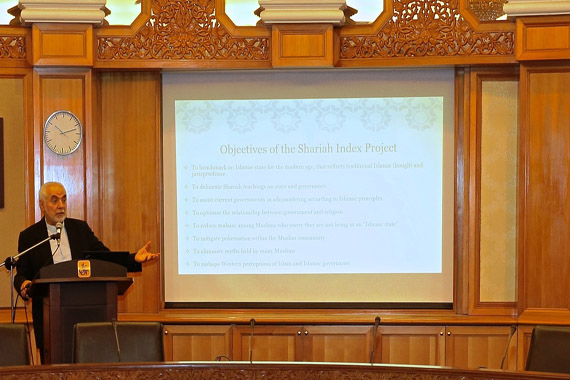 The war in Syria and Iraq saw the rise of the Islamic State (IS or Daesh), which established its caliphate in eastern Syria and Western Iraq in the summer of 2014 after the capture of Mosul and the defeat of the Iraqi army. Since then, the group has expanded its influence across more territories, committed atrocities and brutality to Muslims and non-Muslims alike, and launched series of indoctrination through social media that lured many more to join and sympathise with their dream of an Islamic State.

But what is an Islamic State? And does it already exist?

In a mission “to put clarity, share the light and lower the heat”, Cordoba Initiative New York and IDFR organised a public lecture entitled “Defining Islamic Statehood” by Imam Feisal Abdul Rauf, founder of the Cordoba Initiative on 26 January 2016.

An Islamic State, according to Imam Feisal, can be categorised into three definitions: demographic, penal code, and legal (or Maqasid Shariah). Firstly, a state can be considered Islamic simply by having a large population of Muslims that makes up the majority in the country. Secondly, a state which implements a penal code that outlaws un-Islamic practices can also be considered an Islamic State. Thirdly, an Islamic State can be defined as a state which upholds the Shariah law.

An Islamic State is also composed of three key elements. The first is the declarative statement on the acknowledgement of the sovereignty of God. This is followed by legitimisation where collective vicegerency must comprise the following: Consultation (or Shura), Consensus (or Ijma’), and Allegiance towards the Rulers (also known as Bai’ah). The final and most important element in an Islamic State is the outcome deliverables that should provide economic and social justice.

As part of its efforts to clear the misunderstandings surrounding the issue, the Cordoba Initiative is undertaking a monumental task of producing a Syariah Index which can delineate and index modern Islamic States using quantifiable measures, and itemize Islamic principles of good governance particularly on the preservation of life, intellect, property, dignity, religion and lineage. The Syariah Index Project seeks to reframe the discussion on a wide range of issues, including the relationship between religion and the state, the relationship between Syariah and constitutionalism, the relationship between Islam and other faith communities, Islam and international human rights instruments as well as the judicial reform mechanism and the rule of law.

‘The fundamental principle of an Islamic State’, emphasised Imam Feisal, ‘is the creation of an ideal environment for Life’s test and challenges’. He maintained that Islam is by nature inclusive, as the religion recognises many prophets of religions that came before Islam such as Judaism and Christianity, and believed that this could be a good starting point for inter-religious dialogues.

When asked whether Daesh is a product of a conspiracy, Imam Feisal pointed to the existing rivalry between Shiite and Sunni as a contributing factor to the current situation, and the fact that there is no political or economic parity among the various sectarian and tribal groups in the Middle East. In answering to another question on the issues of rights of women and children, Imam Feisal stressed that their rights are protected in Islam under the category of family and lineage, and these rights are also clearly stated in the holy Quran.

When asked about the challenges, Imam Feisal explained that a major challenge in applying the Syariah Index measurements was determining the value. This challenge proves difficult to overcome as different societies have different values and expectations. However, he shared the data showing that Malaysia is consistently in the top five positions in all areas of the measurement. In the final analysis, he discovered that states that are economically strong correlate positively with the maqasid of life and the maqasid of honor. He concluded the session by convincing the audience that more accurate data and extended research could assist further in defining Islamic Statehood.