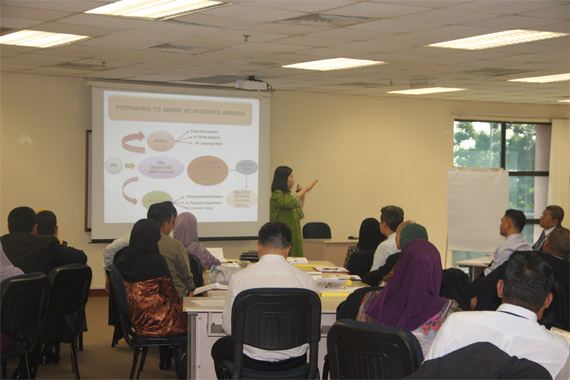 The first series of Pre-Posting Orientation Course for Home-Based Staff and Spouses under Sistem Pentadbiran Kerajaan Malaysia di Luar Negeri (SPKM) was organised from 7 to 18 March 2016. The programme was attended by 31 officers grade 41 and above from various ministries and government agencies/departments, as well as 25 spouses.

The content of the course were revised in December 2015 and the improvised modules have been implemented this year. New modules were introduced for example Senarai Semak Kendiri Unggul (SSKU), Management of LRS at Post, Asset Management, Expectations on The Officers Serving Abroad and site visit to Malaysia Export Exhibition Centre (MEEC), MATRADE.

The participants shared that the two-week course gave them insightful knowledge in various aspects related to responsibilities and tasks while working abroad. They were privileged to have an interactive session with the Director General of IDFR, Datuk Salman Ahmad, in which he shared his experience as a former diplomat.

Certificates of completion were presented by Puan Hajah Norani Ibrahim, Director of Leadership, Negotiation and Public Diplomacy, to the participants on the last day of the programme.