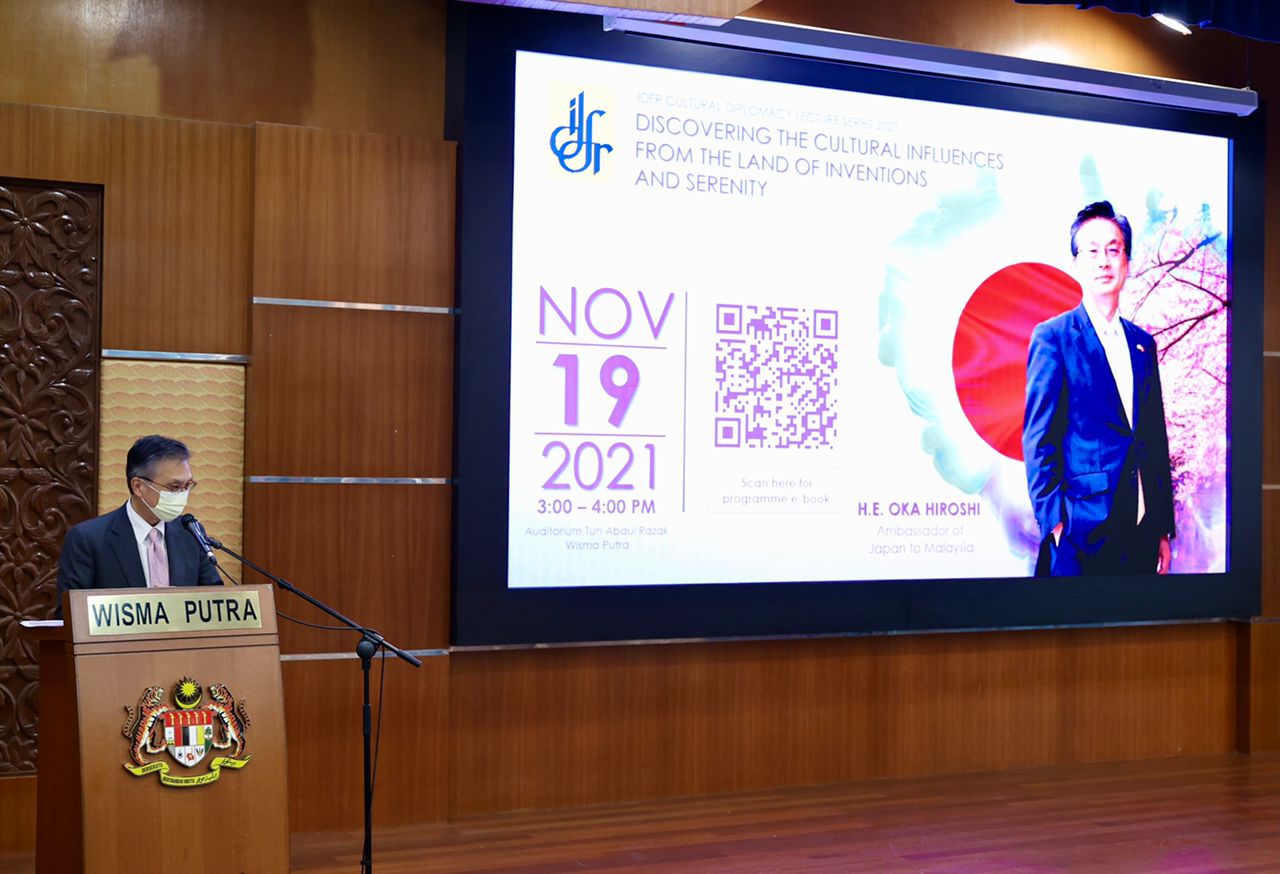 “Cultural diplomacy - public diplomacy and soft power which wins the hearts of others, other than your own” – Ambassador Oka Hiroshi

On 19 November 2021, IDFR was fortunate to have Ambassador Oka Hiroshi, the now, former Ambassador of Japan to Malaysia, for a lecture titled, “Discovering the Influences from the Land of Inventions and Serenity”. IDFR’s Cultural Diplomacy Lecture Series (CDLS) serves as an avenue to raise awareness and enhance understanding of the approaches of cultural diplomacy that can help promote peace, stability, and understanding at either the national, regional, or global level. This year, the institute has decided to break new ground with its initiative by providing the platform to speakers from other nations.

H.E. Oka Hiroshi defines cultural diplomacy as a type of public diplomacy and soft power which wins the hearts of others other than your own. He also claims that it is through culture (art, language, etc.)  that we foster mutual understanding. The representation of Japan’s efforts in doing so was further highlighted in the lecture.

Ambassador Oka began the highlights with the global community’s views on Japan as to how the image of Japan had sparked interest in evolving Japanese culture worldwide. Amongst those which made it to the top three were Japanese food, lifestyle, and its anime industry. The curiosity built in these areas has required Japan to gain economic and technological increase and forced them to further advance their science and technology sector, promotion of traditional culture, and nature.

“Culture, generally, is defined as the mirror of the society, which embodies the current society’s traditions, values, and lifestyle,” said the Ambassador. Japanese culture is known by many for its high-culture image, however, Ambassador Oka reaffirms that when their culture is further described broadly and experienced by others is when it shall be considered useful. On another note, His Excellency also emphasised the significance of educating everyone which is crucial in the success of Japan’s development process. He elaborated that some of Japan’s culture that has made its influence worldwide. Amongst them were Washoku, Sado, Anime, and Judo. Another Japanese Culture that was interestingly shared was the elements of simplicity and tranquility.

Ambassador Oka also talked about the Look East Policy, Ambang Asuhan Jepun (AAJ), Japan International Cooperation Agency in Malaysia (JICA), Japan-East Asia Network of Exchange for Students and Youths (JENESYS), Japan Foundation Kuala Lumpur (JFKL), which are among the initiatives offering language, art, and culture exchanges and intellectual exchanges to Malaysians. Marking its 40th year of anniversary, he highlighted that the people-to-people exchange between the two nations is close-knit, where the various opportunities to work together have hugely benefited both countries.

This hybrid-mode lecture was attended by 30 participants physically and 50 virtually. It was concluded with a presentation of memento by Mr. Ruzaimi Mohamad, Director of the Centre for Languages and Cultural Diplomacy, IDFR, as a token of appreciation for Ambassador Oka Hiroshi’s sharing of knowledge, thoughts, and responses on Japan’s cultural diplomacy. 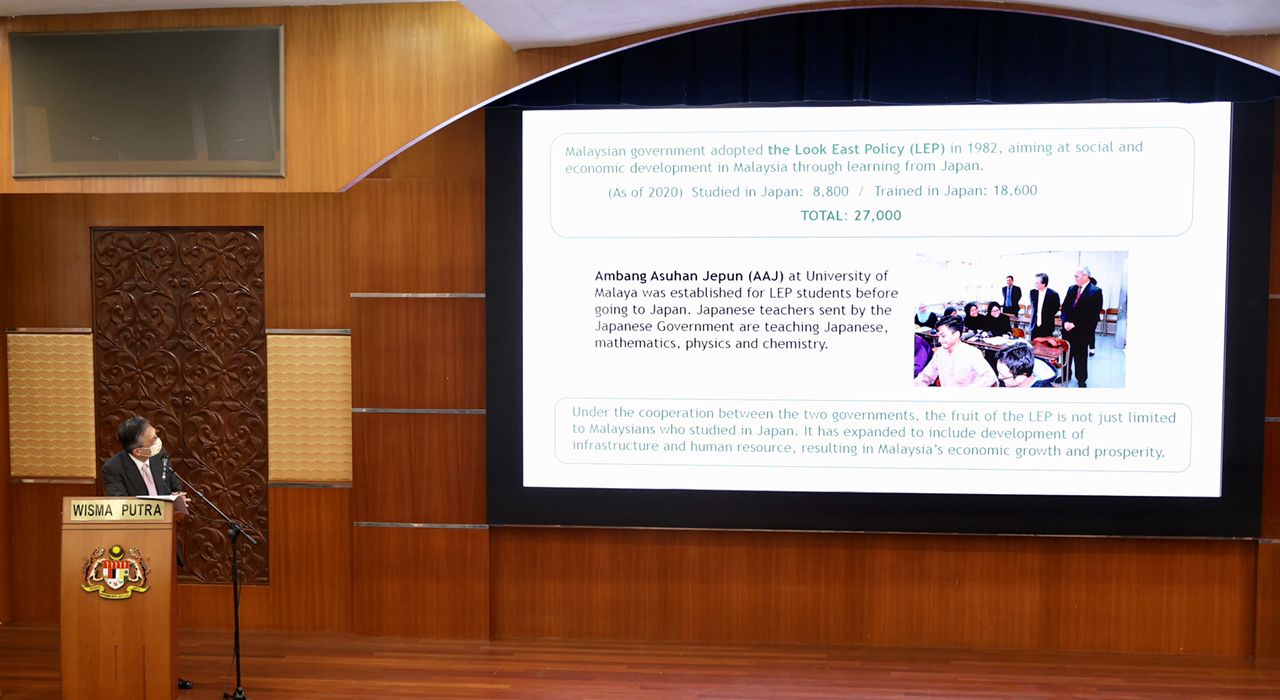 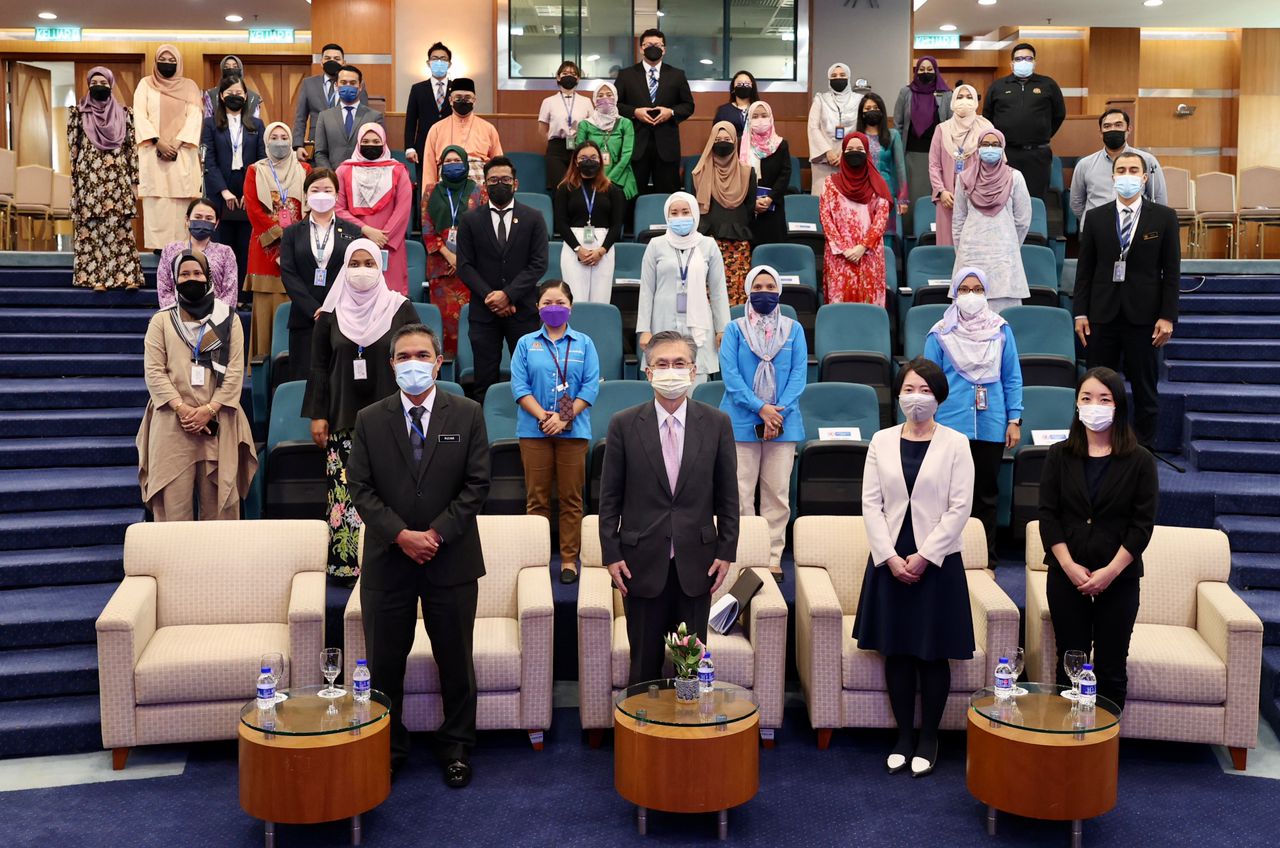