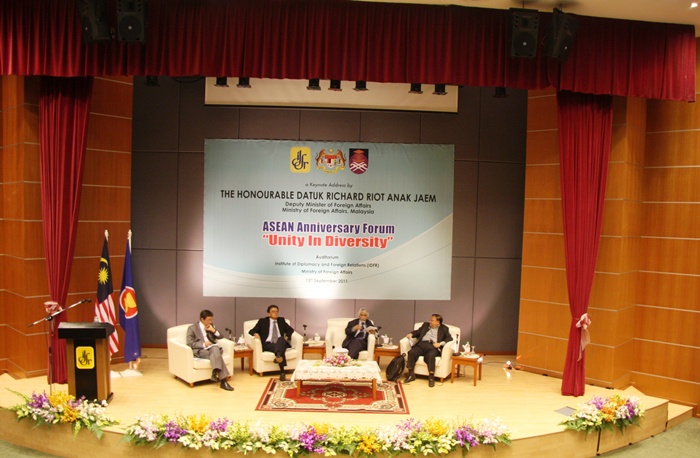 The ASEAN Anniversary Forum was held at the Institute of Diplomacy and Foreign Relations (IDFR) on 13 September 2011 to commemorate the 44th Anniversary of the establishment of ASEAN this year. The event was jointly organized by IDFR, the Institute of ASEAN Studies and Global Affairs (INSPAG) of Universiti Teknologi MARA (UiTM) and the ASEAN-Malaysia National Secretariat of the Ministry of Foreign Affairs of Malaysia.

The ASEAN Anniversary Forum is a part of the ASEAN Lecture Series which in its 4th year of continuing commitment of all the three agencies towards efforts to support and promote the ASEAN agenda at the national and regional levels.

YB Datuk Richard Riot Anak Jaem, Deputy Minister of Foreign Affairs of Malaysia delivered his Keynote Address entitled, “ Unity in Diversity”, which was followed by a panel discussion entitled, “The Changing Regional and Global Scenario: Challenges and  Prospects for ASEAN”.

In his address, the Deputy Minister stated that the hosting of the ASEAN Anniversary Forum is testimony to the concerted effort being undertaken by the Government and the academic sector in Malaysia in raising awareness of ASEAN at the national level. He added that the topic chosen for the panel discussion was very relevant and timely, as ASEAN’s response to its regional and global challenges will be a major factor in determining its progress towards becoming a more developed, progressive and integrated regional entity in the years leading to 2015 and beyond.

YBhg. Dato’ Ku Jaafar Ku Shaari in his welcoming remarks reminded the audience that the title for the keynote address was also the theme for the ASEAN Day this year. The Director General also emphasized that the ASEAN Anniversary Forum was aimed to promote greater awareness of ASEAN within the country and to enable those attending the Forum to review the progress and achievements of the regional grouping. He added that IDFR is forging closer cooperation and undertaking joint activities with other universities in the country in the field of diplomatic training and research. He envisioned the Institute as the focal point in issues related to international relations.

The panel discussion was kicked off by YBhg. Tan Sri Razali Ismail, who openly criticized ASEAN as not progressing fast enough as a regional grouping and that it may have to play a less significant role at the regional and global levels compared to emerging powers like  China  and India.  He added that achieving the goal of a united and more integrated ASEAN community is still far from being realized and that this responsibility may have to be borne by the next generation of leaders from the region.

Another panelist, Assoc. Prof. Ishtiaq Hossain highlighted several difficulties faced by ASEAN, such as nationalism in the member countries arising from a colonial past; different development strategies by the member states; the lack of a common security threat and  differences in threat perception on non-traditional security issues like terrorism, spread of diseases, illegal immigrants etc. However, he noted that the leaders of ASEAN have always being pragmatic with regard to the issues they confront and this provides hope for the future of the region.

Dr. Victor V. Sumsky, who flew in from Moscow the day before, felt that the process of “natural integration” usually requires a longer timeframe and as such it is still too early to consider ASEAN as not a success in its integration process. He also noted ASEAN’s search for a global role which he felt was appropriate and timely. In this regard, he considered the Russian Federation as an “ideal dialogue partner” for ASEAN and foresaw similarities in their approaches to future geopolitical developments in the region.

YBhg Dato’ Dr Mohd Yusof Ahmad in his summation noted the differences in perception with regard to ASEAN’s achievements as a regional grouping and on its challenges and prospects. However, he felt that the opinions expressed should enable the audience to draw their own conclusions with regard to the achievements and effectiveness of ASEAN as a regional grouping. As to the question of where will ASEAN go from here, he concluded that the answer would depend on which camp one belongs to - a hard core optimist and supporter of ASEAN or its critics.Despite some expression of scepticism, most appear quite optimistic about ASEAN’s prospects at successfully managing these new challenges in the future.

Prof. Dr. Haji Hazman Shah Abdullah, Assistant Vice Chancellor, Institute of Quality and Knowledge Advancement of UiTM in his closing remarks, thanked those who had contributed towards  the successful hosting of the event and also highlighted the various activities that are being undertaken by UiTM in the academic field, conferencing and institutional networking in support of achieving the objective of creating an ASEAN Community by 2015.

The event was attended by about 200 participants, with strong support from over 40 foreign missions in Kuala Lumpur. 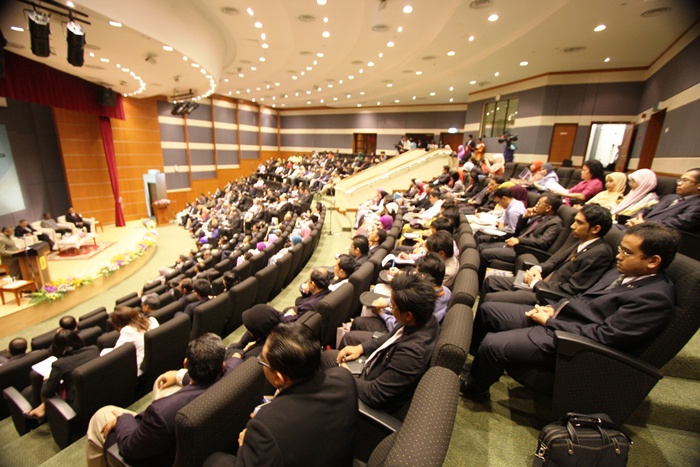