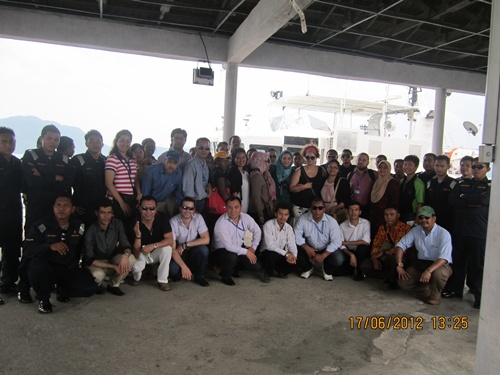 The Crisis Management Course for International Participants 2012 came to the end with the closing and certificate presentation ceremony on 22 June 2012. The event was officiated by His Excellency Dato’ Ku Jaafar Ku Shaari, the Director General of Institute of Diplomacy and Foreign Relation (IDFR) and was attended by several Ambassadors and High Commissioners of the participating countries.

The three weeks course contained several substantive topics such as Theory And Concept Of Crisis Management, The Law And Armed Conflict in International Crisis, Crisis Communication in Situations Of Armed Conflict, Expectations Of Diplomat, The Use Of Force, Terrorism, Human Trafficking, Media Response in Crisis Management, Issues and Challenges in Humanitarian Assistance, Food Crisis, Humanitarian Relief Effort, Security Threat in Gulf of Aden and Indian Ocean, Unity in Diversity, Media Warfare Psychology, War & Peace Journalist, Managing Refugees in A Crisis, Human Right Law in Crisis, Country Risk Management, Diplomacy in Crisis Management and Peaceful Settlement of International Disputes Through Adjudication by the International Court Of Justice. All the lectures were delivered by guest speakers and qualified lecturers from the various agencies and Universities.

What was more interesting, the class lectures were not only in the classroom but participants were also given the opportunity to attend lectures outside the classroom when the lectures were conducted in Puncak Rimba, Bukit Tinggi, 12 - 13 June 2012. Most of the participants were very excited and pleased with the beautiful and peaceful scenery as it was far away from the hustle and bustle of Kuala Lumpur city. Lt Col John Derrick and Major Hamdan Abd Rahman were the guest speakers who came to deliver their lectures in Puncak Rimba, Bukit Tinggi.

Besides that, the Langkawi cable car was one of the major attractions that shouldn’t be missed with a fantastic view of the island at the height of 700 meters above sea level. Indeed the participants were excited and fascinated by the beauty and peace island of Langkawi. Since Langkawi is a shopping haven for duty-free goods from around the world, participants did not miss the opportunity to buy some perfume, cigarettes, confectionary, wine, chocolate, and other retail goods in Kuah Town.

The three weeks course schedule was very compact and it was designed with the various substantive activities whether in classroom lectures, discussions, practical exercises in groups and individually, simulation exercises and study visits. The course had received positive response and feedback from course participants, Ambassadors and High Commissioners of the participating countries. Besides, the participants also thanked IDFR and MTCP for giving them golden opportunity to experience the sweet and unforgettable memory while staying in Malaysia.