“The Current Situation in Palestine” by H.E Abdullah Abdullah Head of the Political Committee of the Legislative Council and Member of the Revolutionary Council of the Palestinian Liberation Movement (FATEH)” 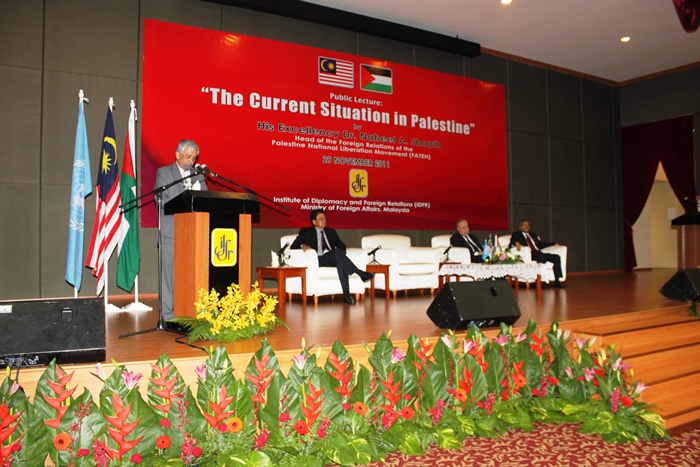 A Public Lecture entitled, “The Current Situation in Palestine” by  H.E Abdullah Abdullah, Head of the Political Committee of the Legislative Council and Member of the Revolutionary Council of the Palestinian Liberation Movement (FATEH)”  was held at the Institute of Diplomacy and Foreign Relations (IDFR) on 29 November 2011. Y.Bhg Tan Sri Razali Ismail, Chairman IRIS Corporation Bhd. and former Permanent Representative of Malaysia to the United Nations and Specila Envoy of the United Nations to Myanmar moderated the discussion.

In his welcoming speech, Y.Bhg Dato’ Ku Jaafar Ku Shaari, the Director General of IDFR said that the current situation in Palestine was a matter of great concern and close to the heart of most Malaysians. He also spoke about Malaysia’s contributions, including efforts by non-governmental organizations in alleviating the hardships of the Palestinian people and in their struggle for statehood.

This was followed by a short speech by H.E. Kamal Malhotra, the United Nations Resident Coordinator and UNDP Representative, who read out the message from the Secretary General of the United Nations on the occasion of the International Day of Solidarity with the Palestinian People. In his message, the Secretary General called upon the Israelis and the Palestinians to show leadership in working towards a two-state solution for a just and lasting peace in the Middle East.

In his speech, H.E. Abdullah Abdullah thanked the Malaysian Government’s unwavering support for the Palestinian peoples’ struggle for freedom and independence. He explained that the Israelis were not sincere in their peace efforts and that their actions like the building of Jewish settlements in the occupied territories were carried out with the view to making a two-state solution to the Palestinian conflict irrelevant. As such, he felt that it was necessary for the Palestinians to carry on with its current political approach like trying to gain admission to the United Nations. If it succeeds in this regard, he opined that the Israelis would have to treat Palestine as an independent state and would not be able to carry out its illegal activities in the occupied territories or commit atrocities to the Palestinian people.

In this regard, the visiting dignitary said that the Palestinians were getting more and more support from the international community in its struggle for independence and to become a full fledged member of the United Nations. He said that efforts by the United States to block Palestine’s admission to the world body have only increased its determination to succeed in this regard. On a related issue, he said that he was not against the American people but only against the policies of the United States government towards the Palestinian issue.

The visiting dignitary also spoke about the efforts being taken to forge unity and power sharing between FATAH, HAMAS and other groups among the Palestinian people. On the “Arab Spring” or mass uprising of people in many of the countries of the Middle East, he said that the Palestinians were not in the position to support any particular faction in these countries. Its policy was to continue its relationship with whichever government that has the support of its people.

The Public Lecture was attended by about 250 participants from government agencies, universities, private sector, think tanks, NGO’s and foreign missions in Kuala Lumpur.