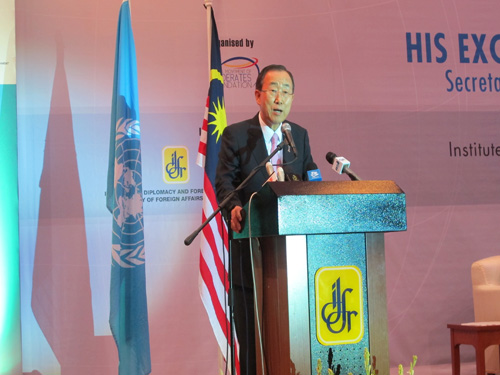 It was indeed a historic moment at the Institute of Diplomacy and Foreign Relations (IDFR) on 22 March 2012 as it had the honour to receive His Excellency Ban Ki-moon, Secretary General of the United Nations for his special address on “Malaysia and the United Nations in a Changing World”. The momentous event was even heightened with the presence of His Royal Highness Raja Nazrin Shah Ibni Sultan Azlan Muhibbuddin Shah, Crown Prince of Perak Darul Ridzuan, marking His Royal Highness’ first appearance as the Royal Patron of IDFR. Also in attendance was Yang Berhormat Dato’ Sri Anifah Aman, Minister of Foreign Affairs, Malaysia. In addition, the event saw the biggest congregation of the diplomatic corps as 78 ambassadors of the foreign embassies in Malaysia was present in saluting the company of His Excellency Ban Ki-moon.

The event unfolded with the opening address by YB Dato’ Sri Anifah Aman, Minister of Foreign Affairs, who warmly welcomed His Excellency Ban Ki-moon to the Institute. In his remarks, the Minister of Foreign Affairs related the many aspects of global challenges and issues that the United Nations has to address and this development led to the change in the role of the UN from an institution that passively balanced ideological differences to an organisation that actively deals with challenges around the world. YB Dato’ Sri Anifah Aman emphasized that in Malaysia’s endeavours towards supporting the United Nations, the foremost formula is moderation, Malaysia’s “recipe for unity in diversity”.

The event proceeded with a brief introductory and biographical remarks by YBhg. Tan Sri Razali Ismail, Chairman of the Global Movement of Moderates Foundation and IDFR Distinguished Fellow, before inviting His Excellency Ban Ki-moon to deliver the special address.

In his special address on “Malaysia and the United Nations in a Changing World”, His Excellency Ban Ki-moon applauded Malaysia’s initiatives in complying with the core value and principles of the United Nations, “pulling together in common cause” and stand “for justice, dignity and mutual understanding”. His Excellency furthered his speech by positioning approaches on how Malaysia could contribute even more in supporting the cause of the United Nations. After taking some questions and insights from the audience, His Excellency concluded his special address by reiterating and commending Malaysia’s efforts and contribution in upholding the organisation’s main beliefs.

Certainly, His Excellency Ban Ki-moon’s presence has marked a notable episode in IDFR’s calendar. Not only that it has patented a significant tie between Malaysia and the United Nations in general, yet also specifically, it has accentuated the Ministry of Foreign Affairs’ and IDFR’s role in strengthening the country’s pursuit towards the cause of the organisation. 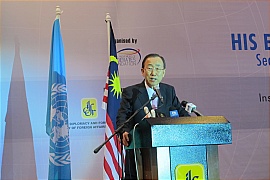 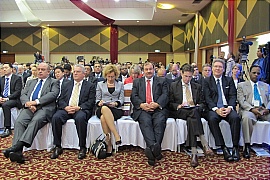 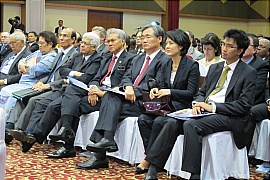 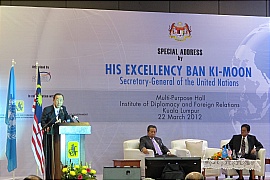