The 30-strong delegation from the Institute of Diplomacy and Foreign Relations (IDFR) led by YBhg. Dato’ Ku Jaafar Ku Shaari, Director General of IDFR, had a memorable and successful study visit to the State of Melaka held from 18th June to 19th June 2012. The delegation comprised senior officials, language lecturers and course participants of the Diploma in Diplomacy (DiD) 2012. The visit achieved its main objective which is to highlight the close relationship and smart collaboration between the Malacca State Government and the Federal Government.

In the course of the two-day visit, we had the honour to pay courtesy calls to TYT Tun Datuk Seri Utama Mohd Khalil bin Yaakob, Governor of Melaka as well as to YB Dato’ Wira Omar bin Kaseh, the State Secretary. The courtesy calls were held at the Kompleks Seri Negeri located in Ayer Keroh.  The delegation was also brought to the Urban Transformational Centre (UTC) in Jalan Hang Tuah which was officially opened by YAB Datuk Seri Najib Tun Razak on the 23rd June 2012.

Highlight of the visit was the humbling experience of meeting a former Malaysian career diplomat and a reputable politician; TYT Tun. As prominent and influential as he is to those in the diplomatic and political world, he spent a total of three hours with the delegation. TYT Tun personally invited the delegation to his office to have a look at pictures taken during his diplomatic postings. TYT Tun was passionate when reliving stories about his previous diplomatic postings to Italy, Morocco, Singapore and Indonesia and was especially delighted in showing framed newspaper cuttings of his days as a young career diplomat and politician. TYT Tun also shared that as a diplomat one should be able to play golf or else be good in art, of which he is good at both, as he showed us a beautiful portrait of his wife painted by him.

In TYT Tun’s inspiring and thought-provoking talk, he strongly emphasised to acquire the art of entertaining as it is a vital part in the lives of diplomats as well as to have good communication skills, to be skilful and be knowledgeable in various issues. TYT Tun gave a well-thought and detailed presentation on the evolution of the diplomatic role through three different time periods; medieval, classical and modern period. He said that diplomacy is as old as communication itself - the way we communicate may change over time, but having exceptional human touch will remain characteristic of the ideal diplomat. 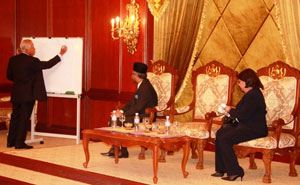 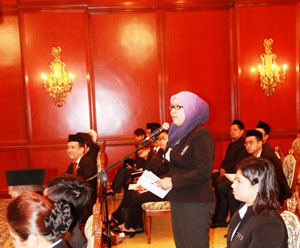 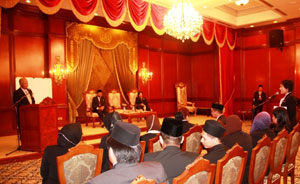 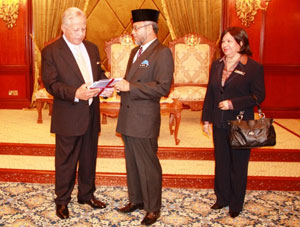