Professor Emeritus Mr. Kishan S. Rana, a former Indian diplomat, enthralled the participants of the Diploma in Diplomacy (DiD) as he presented on ‘The Globalised Diplomats of the 21st Century’ on 25 June 2012 at the Institute of Diplomacy and Foreign Relations (IDFR). His presentation revealed the secret of good diplomatic practices and effective crisis management skills to overcome the challenges and complexity of the 21st century. Diplomacy in the globalized world has made an enormous momentous transition which requires all diplomats to possess diplomatic and crisis management skills in order to be in the transformational system stream. DiD participants have been exposed to these skills by a leading, experienced and knowledgeable diplomacy practitioner of the 21st century, Mr. Kishan Rana.

This remarkable presentation provided valuable insights for the contemporary practice and understanding of the form of diplomacy in 21st century. The session was lively with the active involvement of the DiD participants in the discussion with Mr. Kishan Rana pertaining to the decision making process and the role of diplomats in the current world system. The participants were indulged with Mr. Kishan Rana’s innovative, brilliant and attractive method in cultivating his ideas on the globalized diplomats of the 21st century. They received fresh knowledge on diplomatic skills as well as decision making and crisis management. With these new gains, the participants discovered a diplomat’s needs to conduct 21st century diplomacy. And they believe that the professional skills, correct decision making process and crisis management strategies will form the diplomats of the 21st century.

One of the interesting information that Mr. Kishan Rana gave is the issue of improving the capacity and performance of the diplomatic apparatus in developing states, through improved training and better organization. Mr. Kishan Rana emphasized the significant role of the Ministry of Foreign Affairs (MFA) to reach out to new actors into policy making such as non-state actors, Non-governmental Organization (NGO), think-tank and business community. Furthermore, Mr. Kishan Rana suggested establishing public-private partnership to cultivate ‘whole of country’ mindset. Social media is well known in current phenomena and it has a great impact on the growing K-Society. In this regard, Mr. Kishan Rana proposed for MFA to have social media network to engage closely with various actors and involve them in the policy making process as well. He also highlighted that a diplomat should have the right amount of expertise on various issues as well as general skills to cope with the present and future challenges. Besides that, the simulation exercise was conducted to facilitate participant’s further understanding on the globalised diplomacy of the 21st century. 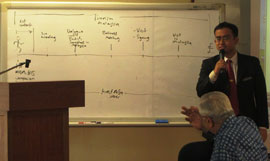