YBhg. Dato’ Ku Jaafar Ku Shaari, Director General of the Institute of Diplomacy and Foreign Relations (IDFR), led a seventeen-strong delegation comprising senior officials from IDFR, course participants of the Diploma and Diplomacy (DiD) 2012 and the secretariat team. The week-long study visit from 14 July - 21 July 2012 to Thailand and attachment programme at the Embassy of Malaysia in Bangkok is a significant module of the 6-month DiD course conducted by IDFR. The twelve DiD participants comprised nine officers from Wisma Putra, and one officer each from the Ministry of Defence (MinDef), Ministry of Education and Malaysia External Trade Development Corporation (MATRADE). This programme is conducted with the aim of providing future Malaysian diplomats with a better understanding on the running of Malaysian Missions abroad as well as the important role Malaysian diplomats play to uphold the good name and sovereignty of the country.

On the first day, the delegation paid a courtesy call on H.E. Amb. Dato’ Nazirah Hussain, Malaysian Ambassador to Thailand, who also hosted a sumptuous dinner for the delegation at the Residence. The two-day attachment programme at the Malaysian Embassy started with a detailed briefing on the general running of the Malaysian Embassy given by Mr. Tajul Aman Mohammad, the Deputy Chief of Mission (DCM), followed by a stint at the Consular office, Tourism  Malaysia, MATRADE and MIDA offices. During the week-long programme, the delegation visited the Ministry of Foreign Affairs of the Kingdom of Thailand where Dato Ku’ Jaafar Ku Shaari presented a talk on, “Malaysia’s preparation for the ASEAN Community 2012”  to a group of senior and high ranking officials of Thailand.

The delegation also paid courtesy calls on Mr. Chalermpol Thanchitt, Deputy Permanent Secretary of the Ministry of Foreign Affairs of Thailand, as well as on H.E Amb. Wiwat Kunthonthiem, the Ambassador attached to Devawongse Varopakarn Institute of Foreign Affairs (DVIFA) which is the training arm of the Foreign Ministry. At DVIFA, the delegation was introduced to 24 newly-recruited Thai diplomats, currently undergoing a two-week orientation programme. This was followed by a visit to the United Nations Economic and Social Commission for Asia and the Pacific (ESCAP) which is the regional development arm of the United Nations for the Asia-Pacific region, where the delegation was briefed on the issues and work carried out by ESCAP.

The delegation was accorded VIP status at an event celebrating the 72nd Anniversary of Pondok Bantan with an ASEAN theme, “A Bridge for Muslim Thais towards the ASEAN Community" made possible under the patronage of Dr. Surin Pitsuwan who is also the Secretary-General of the Association of Southeast Asian Nations (ASEAN). The event, held at Impact Exhibition and Convention Centre, was graced by the attendance of Her Royal Highness Princess Maha Chakri Sirindhorn, who presided over the opening ceremony and graciously delivered the keynote address on the education of the private Islamic schools under the royal patronage. Highlight of the visit was the inspirational moments listening to YABhg. Tun Dr. Mahathir Mohamed delivering his special address on, "The Challenges of Modernity and Globalisation to the ASEAN Community in 2015" at the dinner event as well as meeting the charismatic YABhg. Tun Dr. Siti Hasmah Mohamad Ali.

As all work and no play makes Jack a dull boy, other programmes were lined up on the side to give a better view of Thailand at its best as it moves forward in transforming Thailand into a developed country status. Among the places of interest visited were the Vimanmek Mansion, also known as Vimanmek Teak Mansion, which was a former royal palace located in the Dusit Palace complex as well as the Ananta Samakhom Throne Hall which once served as a former reception hall within Dusit Palace and now serves as a museum and is used for certain state occasions. The delegation also did not miss the opportunity to visit Chatuchak,the largest weekend market in Bangkok, the beautiful Asiatique Riverfront as well as the historical Old Siam. 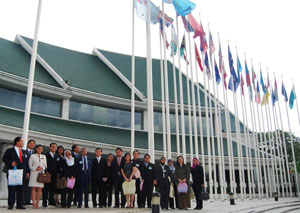 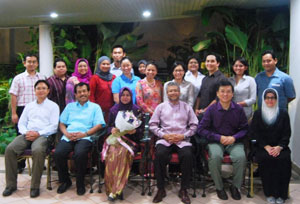 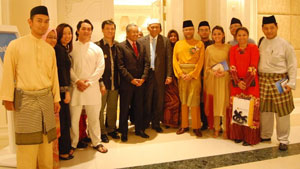 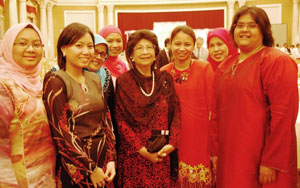 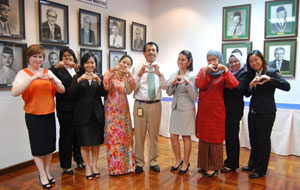 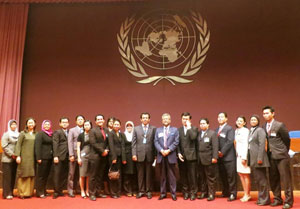