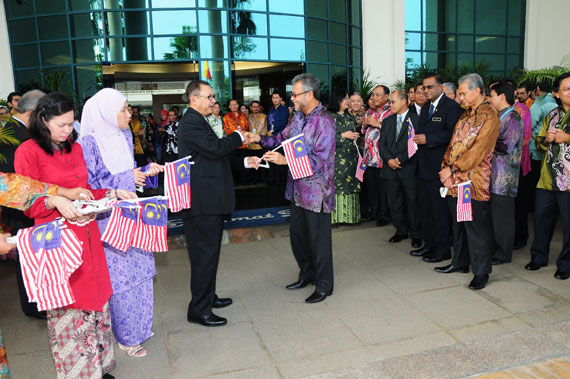 On 26 July 2012, a flag-raising ceremony was held at Wisma Putra in conjunction with the upcoming 55th Independence Day celebration. The ceremony which was held at the VVIP lobby, Wisma Putra, Putrajaya was led by YBhg. Tan Sri Mohd Radzi Abdul Rahman, Secretary General. The event was attended by all Heads of Division and staff including from the Institute of Diplomacy and Foreign Relations (IDFR), led by our Director General, YBhg. Dato’ Ku Jaafar Ku Shaari.

It was a blissful morning where all the staff in batik attire had gathered and Tan Sri Mohd Radzi Abdul Rahman initiated the event by adorning the ministry’s cars with the national flags. To end the event, YBhg. Tan Sri symbolically presented personal flags to the Heads of Division for a group photo. 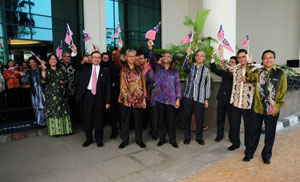