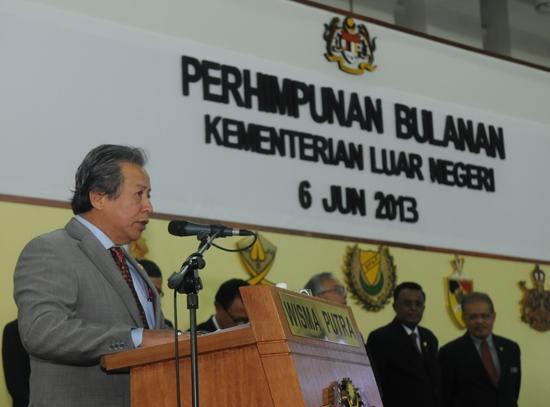 Wisma Putra’s monthly assembly for June, was held at Wisma Putra Multipurpose Hall on 6 June 2013. The Deputy Minister of Foreign Affairs, senior officials, heads of departments, officers as well as staff of the Ministry also attended the assembly. The assembly commenced with a doa recital, the pledging of the civil service oath by those present, the singing of the National Anthem and Wisma Putra’s song. This was then followed by the address by Yang Berhormat Dato’ Sri Anifah Haji Aman, Minister of Foreign Affairs.

Yang Berhormat Dato’ Sri Anifah Haji Aman expressed his appreciation to the Prime Minister for having the trust in him to once again helm the Ministry of Foreign Affairs after the 13th General Election.  The Foreign Minister also congratulated and welcomed the new Deputy Minister of Foreign Affairs, Yang Berhormat Dato’ Hamzah Bin Zainudin. He expressed the hope that all the staff of Wisma Putra  will maintained  their hard working spirit and perseverance shown throughout previous years and also to continuously enhance their skills, knowledge and attitude in order to act proactively and responsively towards the increasing demands of the stakeholders and clients.

The Assembly ended with the Monthly Excellence Service Awards certificate giving ceremony to the recipients and light refreshment. 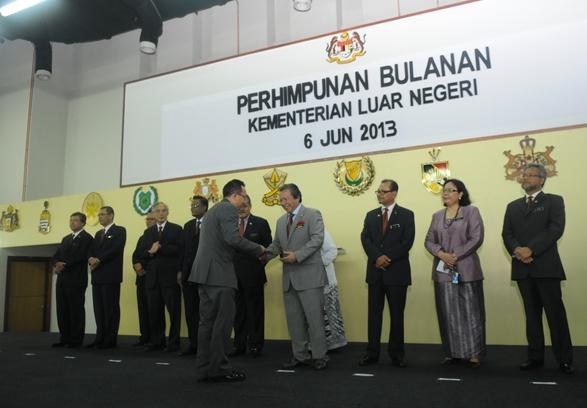