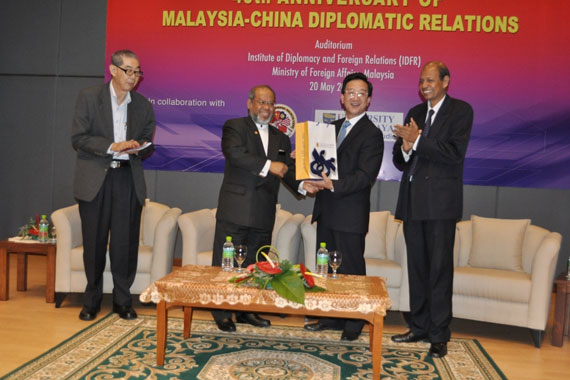 The Institute of Diplomacy and Foreign Relations (IDFR), Ministry of Foreign Affairs, in collaboration with the Malaysia-China Friendship Association and Institute of China Studies, University of Malaya, organised the Panel Discussion in conjunction with the 40th Anniversary of Malaysia-China Diplomatic Relations. This panel discussion was held to commemorate the 40th anniversary of the establishment of diplomatic relations between Malaysia and China. It was also to provide an overview and understanding of the relationship of these two countries as well as enhance awareness of the importance of bilateral relations between Malaysia and China to the public. It was held on 20th of May 2014 at the Auditorium, IDFR.

The event commenced with welcoming remarks by YBhg. Dato’ Hussin Nayan, Director General of IDFR. H.E Huang Huikang, Ambassador of China to Malaysia then delivered the Keynote Address. He reminded us the significant visit made by Malaysia’s second Prime Minister, Tun Abdul Razak bin Hussein Al-Haj to China, which paved the way to build stronger cooperation between the two countries, resulting in a bilateral trade volume of 106 billion US Dollars in 2013 and an exchange of 100 million personnel within a year.

Speakers of the second session titled, “The Rise of China and Its Implications for Malaysia-China Relations: Economics, Political and Strategic Perspectives” were Professor Dr. Cheong Kee Cheok (Senior Research Fellow, Faculty of Economics and Administration, University of Malaya), Professor Dr. Li Mingjiang ( Coordinator of China Programme, S. Rajaratnam School of International Studies, NTU, Singapore) and Dr. Ngeow Chow Bing (Senior Research Fellow, Institute of China Studies, University of Malaya) and moderated by Professor Dr. Lee Poh Hing, Senior Research Fellow in the Institute of China Studies, Universiti Malaya. The emerging power and influence of China in the region and the rest of the world and how that has affected the relationship between the two countries were discussed, and the continued debate as to whether China is an aggressor in the South China Sea concluded the programme. 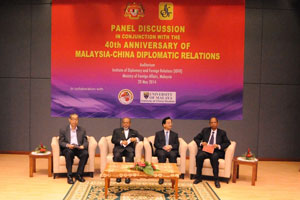 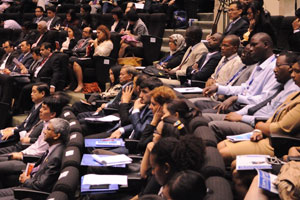