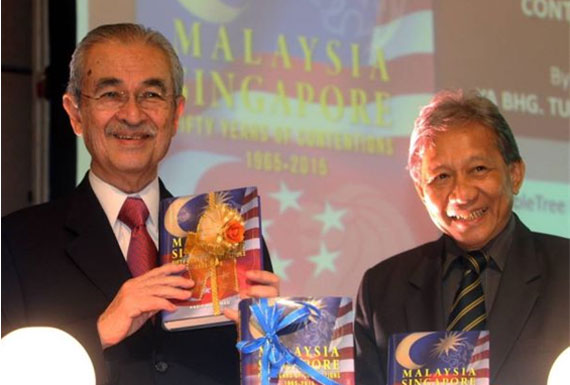 Tun Abdullah Ahmad Badawi, Former Prime Minister when launching the book “Malaysia-Singapore Fifty Years of Contentions 1965 – 2015”  described it as an in-depth case study of the many troubling bilateral issues. Tun added that bilateral relations are more than any sum of events, agreements or negotiations but must be based on principles, such as frankness and mutual respect, consistency and stability, reliability and predictability.

Tan Sri Ab. Kadir hopes that this book will assist those dealing with international relations to reflect upon the past and help them manage the future effectively. According to him, this book is less analysis, more narrative and very easy to read. The 364-page book has nine chapters with 20 pages of pictures and illustrations.

Amongst the attendees at the event were representatives and officials from the Ministry of Foreign Affairs, government agencies and NGOs. IDFR was represented by Dato’ Md. Hussin Nayan, the Director General, Ambassador Aminahtun Hj. A. Karim, the Deputy Director General and Mrs. Farah Dibah Abu Hanipah from Academic Studies, Research and Publication Division