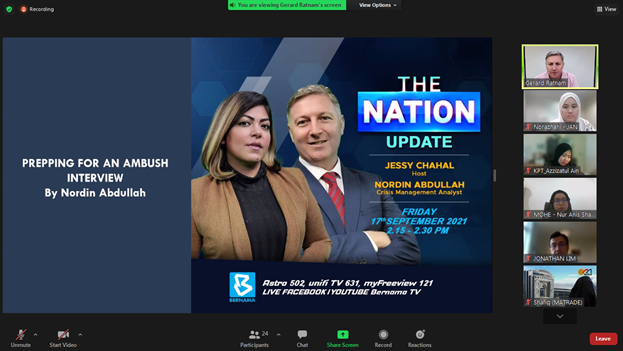 The Centre for Leadership, Negotiation and Public Diplomacy (LNPD), IDFR had successfully organised the Public Diplomacy Workshop for Junior Level Officers for the year 2021. The course was held online from 28 to 30 September 2021 and was intended for Malaysian government officials from the Management and Professional Group, grade 41 to 44 who are involved in public diplomacy and the media in delivering information and government policy to the target local and foreign civil society.

Seventeen participants who attended the course were officers from various ministries, departments, and agencies of the Malaysian government. They were from the Department of Chemistry Malaysia, National Audit Department, Malaysia External Trade Development Corporation, Malaysia Nuclear Agency, Ministry of Higher Education, Ministry of International Trade and Industry and Ministry of Defence.

This course was designed for the participants to better understand the importance of public diplomacy and media in delivering government’s policies and information; to be able to prepare good press release in Bahasa Melayu and English; and to be able to communicate diplomatically with the public in the traditional media and new media such as Facebook and Twitter. The participants were exposed to modules such as Media and Public Diplomacy; Press Release Writing (English); Handling Media During Crises; Press Release Writing (Bahasa Melayu); Press Release Writing (Discussion and Presentation); Mastering The New Media; Managing Public in Social Media Platform (Practical); Basic Live Interview (TV and Radio) and Script Preparation and Mock-Up Online Interview. These modules were delivered by Ms. Salbiah Mohd Said, Mr. Nordin Abdullah, Mr. Mohd Razman Abdullah and Mr. Gerard Ratnam, alongside colleagues Ms. Jessy Chahal and Ms. Sonia Ayesha.

The Director of LNPD, Mr. Hamizan Hashim expressed his special appreciation and gratitude to the experts from BERNAMA for sharing their views and invaluable experiences with the participants. He also congratulated all participants for their commitment and active participation throughout the course.